Linear algebra is a sub-field of mathematics concerned with vectors, matrices, and linear transforms.

Although linear algebra is integral to the field of machine learning, the tight relationship is often left unexplained or explained using abstract concepts such as vector spaces or specific matrix operations.

In this post, you will discover 10 common examples of machine learning that you may be familiar with that use, require and are really best understood using linear algebra. 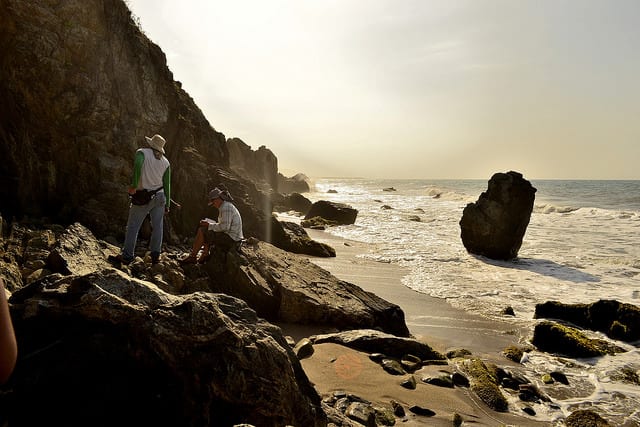 In this post, we will review 10 obvious and concrete examples of linear algebra in machine learning.

I tried to pick examples that you may be familiar with or have even worked with before. They are:

Do you have your own favorite example of linear algebra in machine learning?
Let me know in the comments below.

In machine learning, you fit a model on a dataset.

For example, below is a snippet of the Iris flowers dataset:

This data is in fact a matrix: a key data structure in linear algebra.

Further, when you split the data into inputs and outputs to fit a supervised machine learning model, such as the measurements and the flower species, you have a matrix (X) and a vector (y). The vector is another key data structure in linear algebra.

Each row has the same length, i.e. the same number of columns, therefore we can say that the data is vectorized where rows can be provided to a model one at a time or in a batch and the model can be pre-configured to expect rows of a fixed width.

Perhaps you are more used to working with images or photographs in computer vision applications.

A photo is yet another example of a matrix from linear algebra.

Operations on the image, such as cropping, scaling, shearing, and so on are all described using the notation and operations of linear algebra.

Sometimes you work with categorical data in machine learning.

A one hot encoding is where a table is created to represent the variable with one column for each category and a row for each example in the dataset. A check, or one-value, is added in the column for the categorical value for a given row, and a zero-value is added to all other columns.

For example, the color variable with the 3 rows:

Each row is encoded as a binary vector, a vector with zero or one values and this is an example of a sparse representation, a whole sub-field of linear algebra.

Linear regression is an old method from statistics for describing the relationships between variables.

It is often used in machine learning for predicting numerical values in simpler regression problems.

There are many ways to describe and solve the linear regression problem, i.e. finding a set of coefficients that when multiplied by each of the input variables and added together results in the best prediction of the output variable.

Where y is the output variable A is the dataset and b are the model coefficients.

In applied machine learning, we often seek the simplest possible models that achieve the best skill on our problem.

Simpler models are often better at generalizing from specific examples to unseen data.

In many methods that involve coefficients, such as regression methods and artificial neural networks, simpler models are often characterized by models that have smaller coefficient values.

A technique that is often used to encourage a model to minimize the size of coefficients while it is being fit on data is called regularization. Common implementations include the L2 and L1 forms of regularization.

Both of these forms of regularization are in fact a measure of the magnitude or length of the coefficients as a vector and are methods lifted directly from linear algebra called the vector norm.

Often, a dataset has many columns, perhaps tens, hundreds, thousands, or more.

Modeling data with many features is challenging, and models built from data that include irrelevant features are often less skillful than models trained from the most relevant data.

It is hard to know which features of the data are relevant and which are not.

Methods for automatically reducing the number of columns of a dataset are called dimensionality reduction, and perhaps the most popular method is called the principal component analysis, or PCA for short.

This method is used in machine learning to create projections of high-dimensional data for both visualization and for training models.

The core of the PCA method is a matrix factorization method from linear algebra. The eigendecomposition can be used and more robust implementations may use the singular-value decomposition, or SVD.

Another popular dimensionality reduction method is the singular-value decomposition method, or SVD for short.

As mentioned, and as the name of the method suggests, it is a matrix factorization method from the field of linear algebra.

It has wide use in linear algebra and can be used directly in applications such as feature selection, visualization, noise reduction, and more.

We will see two more cases below of using the SVD in machine learning.

In the sub-field of machine learning for working with text data called natural language processing, it is common to represent documents as large matrices of word occurrences.

For example, the columns of the matrix may be the known words in the vocabulary and rows may be sentences, paragraphs, pages, or documents of text with cells in the matrix marked as the count or frequency of the number of times the word occurred.

This is a sparse matrix representation of the text. Matrix factorization methods, such as the singular-value decomposition can be applied to this sparse matrix, which has the effect of distilling the representation down to its most relevant essence. Documents processed in this way are much easier to compare, query, and use as the basis for a supervised machine learning model.

Predictive modeling problems that involve the recommendation of products are called recommender systems, a sub-field of machine learning.

The development of recommender systems is primarily concerned with linear algebra methods. A simple example is in the calculation of the similarity between sparse customer behavior vectors using distance measures such as Euclidean distance or dot products.

Matrix factorization methods like the singular-value decomposition are used widely in recommender systems to distill item and user data to their essence for querying and searching and comparison.

Artificial neural networks are nonlinear machine learning algorithms that are inspired by elements of the information processing in the brain and have proven effective at a range of problems, not the least of which is predictive modeling.

Deep learning is the recent resurgence in the use of artificial neural networks with newer methods and faster hardware that allow for the development and training of larger and deeper (more layers) networks on very large datasets. Deep learning methods are routinely achieving state-of-the-art results on a range of challenging problems such as machine translation, photo captioning, speech recognition, and much more.

At their core, the execution of neural networks involves linear algebra data structures multiplied and added together. Scaled up to multiple dimensions, deep learning methods work with vectors, matrices, and even tensors of inputs and coefficients, where a tensor is a matrix with more than two dimensions.

In this post, you discovered 10 common examples of machine learning that you may be familiar with that use and require linear algebra.

People Architecture and Agile Compensation May Save HR in AI Era