Have you ever been behind a slowpoke car?

It always seems to happen that there’s a car going excruciatingly slow when you are in a rush to get to your destination. You try to look through the rear window of their car to get a sense of what kind of person is in the driver’s seat, and you are curious about why that person can’t seem to find the accelerator pedal. Your first thought is that maybe it’s a senile person that no longer seems to be able to properly control a car. Or, maybe it’s a young timid driver that worries they’ll get a ticket for going to fast. Those fully compliant stops and long pauses at a stop sign are enough to make you want to honk your horn and maybe even shove the car ahead of you out of the way.

In driving parlance, those slow drivers are often referred to as “dead time” drivers. They aren’t in any rush. They have all the time in the world. For them, they believe that driving slowly is the right way to drive. If they see a yellow light up ahead, by gosh they are going to make sure to stop before it turns red. Trying to run a yellow light would be out of the question. On the freeway, they love to go slowly in the slow lane. Even more beguiling is that they have no hesitation to drive slowly in the fast lane, though they would prefer to stay out of the fast lane because it is normally filled with brutes.

Speaking of brutes, have you ever had a crazed fast-driving driver that came right up to your bumper, even though you were already going well over the speed limit. These speed demons believe that any open space on the roadway is a bad thing and that their car should be able to go wherever it wants. Running a yellow light is of course the only way to properly drive. Indeed, if the light goes red, well, as long as you aren’t overly conspicuous then it’s okay to run through a red light that just turned from yellow.

These fast drivers are often referred to as “deadline” drivers. They drive as though they are headed to the hospital and if they don’t make it there on time then their spleen will burst. Urgency is their middle name. Stomping on the accelerator pedal is the preferred mode of driving a car. Some will say that they speed because they can, while others might be more deferential and merely blame the speeding on their car (sir, it’s got a V8 engine made to go fast, what was I to do, they lament to a motorcycle cop).

These are two dramatically different driving styles, namely the slow driver and the fast driver. 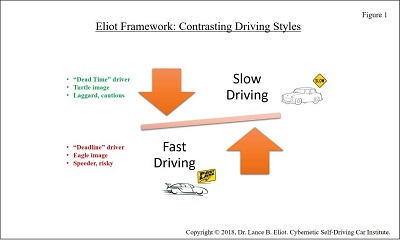 When you ask each type about the other type, you’ll get some harsh words from each of them.

Take a look at Figure 2. 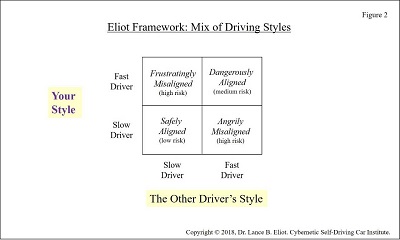 Besides the overall discomfort that is created by a slow driver or a fast driver, there’s also the question of what’s ill-advised and also what’s just outright illegal in terms of driving.

Take a look at Figure 3. 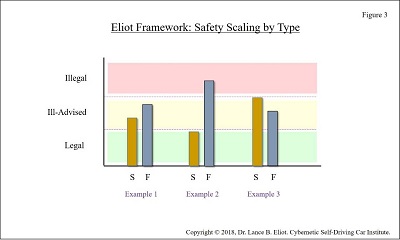 To some degree, the notion of “slow” and “fast” driving is somewhat relative. Two cars could be going the proper speed limit, and yet one might be considered a slow driver and the other a fast driver. Within the latitude of legal driving, you can go slowly, and you can go fast, doing so without necessarily violating any laws. I’ve known fast drivers that when they encountered another fast driver it was as though the first fast driver was a slow driver in comparison. I’ve seen a slow driver that encountered another slow driver, and then loudly complained that the other driver was exceedingly and frustratingly too slow.

That being said, most states have as a provision that any kind of driving that is considered inappropriate can be labeled as illegal if it endangers those on the roadways.  You can be driving the speed limit, and even less than the speed limit, and still get a ticket, such as if it’s a rainy day and the streets are slick, so much so that a police officer believes you were driving recklessly. There are some that drive fast because others around them are doing so, and likewise some that drive slowly because other cars around them are doing so. In that sense, peer pressure can impact our driving style.

Circumstances can impact whether you opt to be slow driver or a fast driver. You might normally be a “medium” driver that generally doesn’t go too fast and nor too slow. But, on a given day or time, and given location, you might switch over into another style. Suppose you are stuck on the freeway and its pure bumper to bumper traffic. It’s hard to be the fast driver in that situation and so you’re more likely to momentarily be the slow driver. If you are on the open highway heading across the country, and there’s no other traffic for miles, you are likely willing to become the fast driver.

Now take a look at Figure 4. 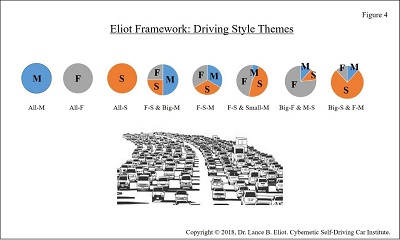 What does this all have to do with AI self-driving cars?

At the Cybernetic Self-Driving Car Institute, we are developing AI software that enables a self-driving car to be M or S or F, and be able to shift their driving style as needed, and also be able to detect the style of other cars around them.

Right now, most of the existing AI self-driving cars are relatively slow drivers and you can properly suggest they should be classified as embodying a S style. The auto makers and tech firms would rather have their self-driving cars walk before they run, so to speak. The moment that your self-driving car starts to get up into higher speeds, it means there’s less time for the AI to react and a greater chance of the self-driving car getting into untoward situations.

I’ve had some AI developers from some of the auto makers that tell me that those human drivers going faster than the speed limit are wrong and driving illegally. As such, these AI developers don’t seem to care that the law abiding self-driving car is actually creating a dangerous traffic situation by going slower than the prevailing traffic. It’s the stupid humans that are at fault. Though I certainly understand their viewpoint, it nonetheless does not recognize the reality of the driving world.

Human drivers that encounter a self-driving car are right now pretty much willing to give the self-driving car some wiggle room and not be bothered by the slow driving aspects. It’s akin to driving near a teenage novice driver. We all allow those drivers a lot of room and figure that their aren’t many of them, so why not just let it be.  There are so few self-driving cars on the roadways that if you do encounter one, it’s a novelty and you are glad to let it drive however it wants.

Imagine though if you had a thousand of the teenage novice drivers all surrounding you while you drove. Your leniency toward them would wear thin. I’ve predicted many times that once we get a lot of self-driving cars on the roadways, the “polite” human drivers that are right now allowing self-driving cars to do what they want to do, will become a lot less polite. Being boxed in while on the freeway, by perfectly law abiding “slow” self-driving cars to my left, right, ahead, and behind, well I’m betting that not all human drivers are going to tolerate it.

Take a look at Figure 5. 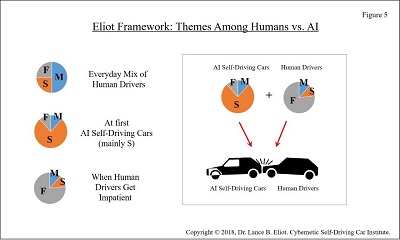 Meanwhile, right now, you could say that the AI self-driving cars are nearly all of a slow driving style, with some having occasions of fast and medium driving styles mixed in.

The model or framework for an AI self-driving car consists of the self-driving car using its sensors to detect other cars, it then does sensor fusion to bring together the sensory data into a cohesive whole, it then updates its virtual world model as to what the surrounding traffic situation consists of, and then it creates action plans as to what to do next, and then provides commands to the car controls accordingly. By labeling the surrounding cars that the sensors detect, and then tracking those cars throughout the virtual world model, the AI can characterize how those cars are driving and what their dominant driving style consists of, whether being M, S, or F.

During the formulation of action plans, the AI then can use that aspect to predict what the other cars around the self-driving car might do next. This continues over and over, and the AI is able to continually update the tracking to reflect what the other cars actually do. As mentioned earlier, a slow driver will not always necessarily drive slowly, and so the AI needs to be careful in not creating a myopic prediction.

Some AI developers have said that there’s no need to do this kind of tracking because once there are all AI self-driving cars on the roadways, and no human driven cars, then there won’t be the conventional M, S, or F anymore. Furthermore, the AI self-driving cars will communicate with each other via V2V (vehicle-to-vehicle communication). Once again, no need therefore to track and ascertain styles of the surrounding cars.

Yes, that utopian world is going to be something to see, but it’s a long way from now. We have 200+ million conventional cars today in the United States alone, and those aren’t going to overnight suFdenly all become AI self-driving cars.

This article is originally posted on AI Trends. 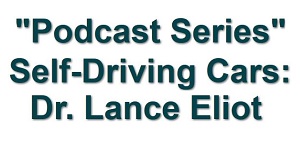 Lighting Up The Brain With Optogenetics 052217

How does parental separation affect a childs brain 062218