We have previously seen that calculus is one of the core mathematical concepts in machine learning that permits us to understand the internal workings of different machine learning algorithms.

Calculus, in turn, builds on several fundamental concepts that derive from algebra and geometry. The importance of having these fundamentals at hand will become even more important as we work our way through more advanced topics of calculus, such as the evaluation of limits and the computation of derivatives, to name a few.

In this tutorial, you will discover several pre-requisites that will help you work with calculus. What you need to know before you get started: A brief tour of Calculus Pre-Requisites
Photo by Dino Reichmuth, some rights reserved.

The Concept of a Function

In machine learning, a neural network learns a function by which it can represent the relationship between features in the input, the independent variable, and the expected output, the dependent variable. In such a scenario, therefore, the learned function defines a deterministic mapping between the input values and one or more output values. We can represent this mapping as follows:

More formally, however, a function is often represented by y = f(x), which translates to y is a function of x. This notation specifies x as the independent input variable that we already know, whereas y is the dependent output variable that we wish to find. For example, if we consider the squaring function, f(x) = x2, then inputting a value of 3 would produce an output of 9:

A function can also be represented pictorially by a graph on an x–y coordinate plane.

By the graph of the function f we mean the collection of all points (x, f(x)).

A straight line is one of the simplest functions that can be graphed on the coordinate plane. Take, for example, the graph of the line y = 3x + 5: 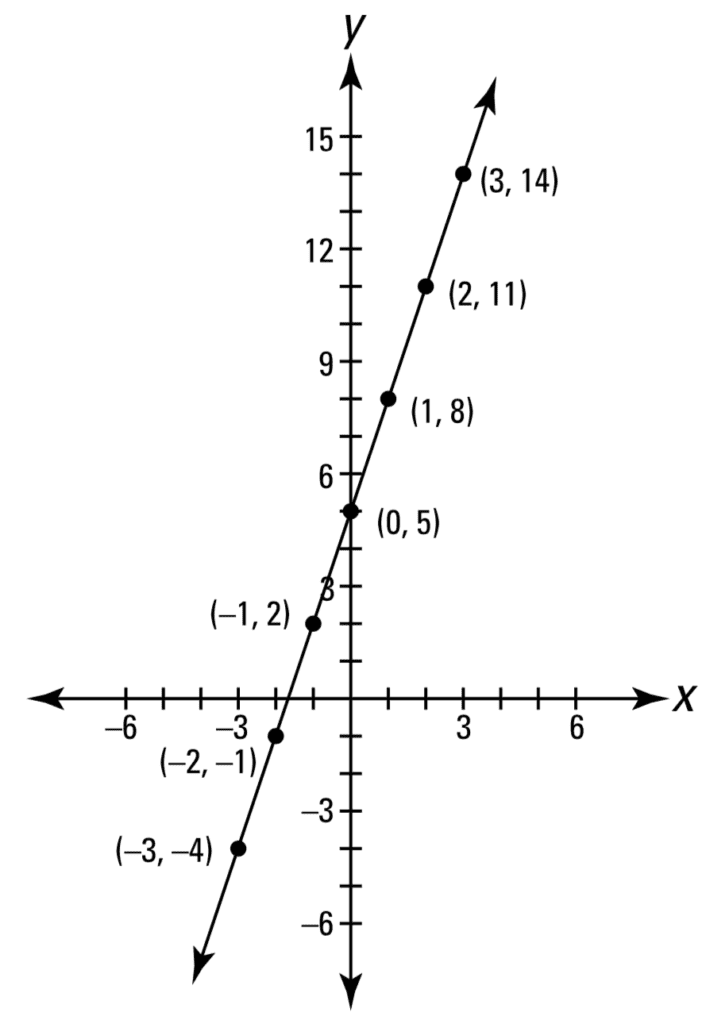 Line Plot of a Linear Function
Taken from Calculus for Dummies

We had seen how to calculate the slope when we addressing the topic of Rate of Change.

If we had to consider the special case of setting the slope to zero, the resulting horizontal line would be described by a constant function of the form:

Within the context of machine learning, the calculation defined by such a linear function is implemented by every neuron in a neural network. Specifically, each neuron receives a set of  n inputs, xi, from the previous layer of neurons or from the training data, and calculates a weighted sum of these inputs (where the weight, wi, is more common term for the slope, m, in machine learning) to produce an output, z:

The Weighted Sum of Inputs
Taken from Deep Learning

The process of training a neural network involves learning the weights that best represent the patterns in the input dataset, which process is carried out by the gradient descent algorithm.

The simplest of all non-linear functions can be considered to be the parabola, that may be described by:

When graphed, we find that this is an even function, because it is symmetric about the y-axis, and never falls below the x-axis. 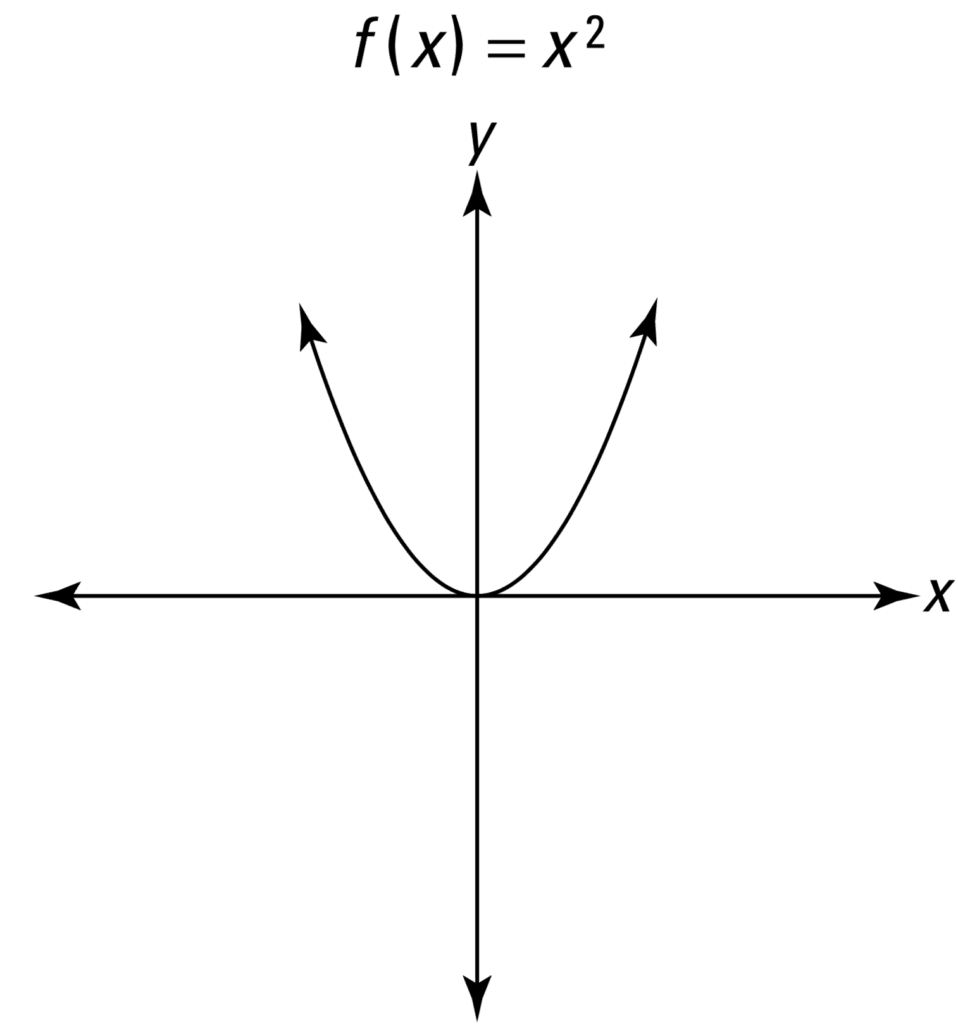 Line Plot of a Parabola
Taken from Calculus for Dummies

Nonetheless, non-linear functions can take many different shapes. Consider, for instance, the exponential function of the form f(x) = bx, which grows or decays indefinitely, or monotonically, depending on the value of x:

Line Plot of an Exponential Function
Taken from Calculus for Dummies

Or the logarithmic function of the form f(x) = log2x, which is similar to the exponential function but with the x– and y-axes switched: Line Plot of a Logarithmic Function
Taken from Calculus for Dummies

Of particular interest for deep learning are the logistic, tanh, and the rectified linear units (ReLU) non-linear functions, which serve as activation functions:

Line Plots of the Logistic, Tanh and ReLU Functions
Taken from Deep Learning

The importance of these activation functions lies in the introduction of a non-linear mapping into the processing of a neuron. If we had to rely solely on the linear regression performed by each neuron in calculating a weighted sum of the inputs, then we would be restricted to learning only a linear mapping from the inputs to the outputs. However, many real-world relationships are more complex than this, and a linear mapping would not accurately model them. Introducing a non-linearity to the output, z, of the neuron, allows the neural network to model such non-linear relationships:

… a neuron, the fundamental building block of neural networks and deep learning, is defined by a simple two-step sequence of operations: calculating a weighted sum and then passing the result through an activation function.

Non-linear functions appear elsewhere in the process of training a neural network too, in the form of error functions.

A non-linear error function can be generated by calculating the error between the predicted and the target output values as the weights of the model change. Its shape can be as simple as a parabola, but most often it is characterised by many local minima and saddle points. The gradient descent algorithm descends this non-linear error function by calculating the slope of the tangent line that touches the curve at some particular instance: another important concept in calculus that permits us to analyse complex curved functions by cutting them into many infinitesimal straight pieces arranged alongside one another.

Fundamentals of Pre-Algebra and Algebra

Algebra is one of the important foundations of calculus.

There are several fundamental concepts of algebra that turn out to be useful for calculus, such as those concerning fractions, powers, square roots, and logarithms.

Let’s first start by revising the basics for working with fractions.

The next important pre-requisite for calculus revolves around exponents, or powers as they are also commonly referred to. There are several rules to keep in mind when working with powers too. Properties of Roots
Taken from Calculus for Dummies 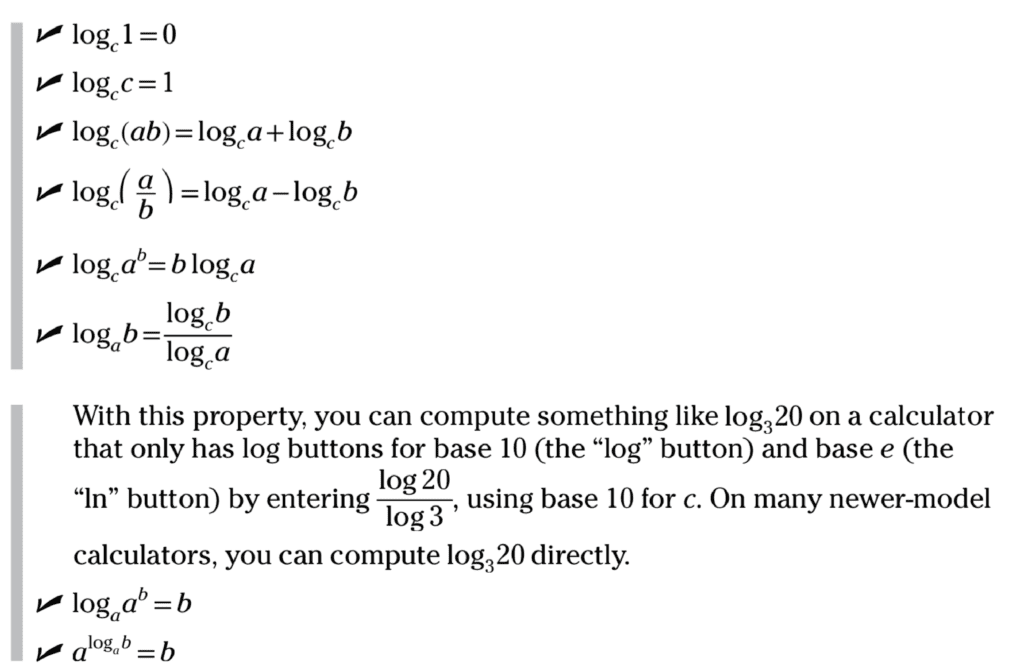 Properties of Logarithms
Taken from Calculus for Dummies

Finally, knowing how to solve quadratic equations can also come in handy in calculus.

Setting each factor to zero permits us to find a solution to this equation, which in this case is x = ±3.

Alternatively, the following quadratic formula may be used:

The Quadratic Formula
Taken from Calculus for Dummies

If we had to consider the same quadratic equation as above, then we would set the coefficient values to, a = 1, b = 0, and c = 9, which would again result in x = ±3 as our solution.

Trigonometry revolves around three main trigonometric functions, which are the sine, the cosine and the tangent, and their reciprocals, which are the cosecant, the secant and the cotangent, respectively.

When applied to a right angled triangle, these three main functions allow us to calculate the lengths of the sides, or any of the other two acute angles of the triangle, depending on the information that we have available to start off with. Specifically, for some angle, x, in the following 3-4-5 triangle: The 3-4-5 Triangle
Taken from Calculus for Dummies

The Three Main Trigonometric Functions
Taken from Calculus for Dummies

The sine, cosine and tangent functions only work with right-angled triangles, and hence can only be used in the calculation of acute angles that are smaller than 90o. Nonetheless, if we had to work within the unit circle on the x–y coordinate plane, then we would be able to apply trigonometry to all angles between 0o and 360o: The Unit Circle
Taken from Calculus for Dummies

The unit circle has its center at the origin of the x–y coordinate plane, and a radius of one unit. Rotations around the unit circle are performed in a counterclockwise manner, starting from the positive x-axis. The cosine of the rotated angle would then be given by the x-coordinate of the point that hits the unit circle, whereas the y-coordinate specifies the sine of the rotated angle. It is also worth noting that the quadrants are symmetrical, and hence a point in one quadrant has symmetrical counterparts in the other three.

The graphed sine, cosine and tangent functions appear as follows: 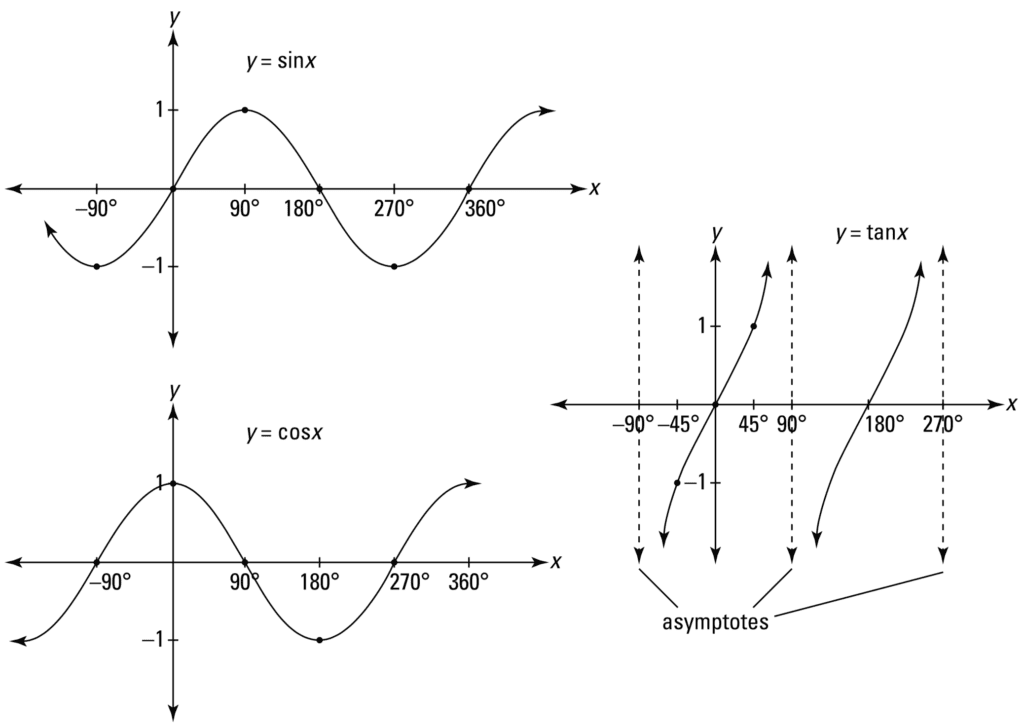 Line Plots of the Sine, Cosine and Tangent Functions
Taken from Calculus for Dummies

The tangent function is undefined at ±90o, since the cosine in the denominator returns a value of zero at this angle. Hence, we draw vertical asymptotes at these angles, which are imaginary lines that the curve approaches but never touches.

One final note concerns the inverse of these trigonometric functions. Taking the sine function as an example, its inverse is denoted by sin-1. This is not to be mistaken for the cosecant function, which is rather the reciprocal of sine, and hence not the same as its inverse.

In this tutorial, you discovered several pre-requisites for working with calculus.

The post What you need to know before you get started: A brief tour of Calculus Pre-Requisites appeared first on Machine Learning Mastery.

Stressed Dads Can Pass on Heightened Stress Vulnerability to Kids